If you’re a casual fan of gin, you may be unaware that there are many different and specific types of gin to choose from. While browsing a liquor store’s gin section, you may Old Tom Gin.

But do you have any idea what an Old Tom Gin even is?

Old Tom Gin is a gin that is usually made with sugar, giving the spirit a sweeter and somewhat malty taste. It includes the classic juniper botanical found in every gin. An Old Tom Gin is not as strictly regulated as some other gin types, leaving its taste and production to be varied.

In this article, we’ll dig into this definition a little further, including the different types of Old Tom Gin that are popular in today’s markets, as well as its history and background.

We’ll also look into some of the popular ways it is consumed by Old Tom Gin lovers.

Breaking Down the Definition: What Actually Is Old Tom Gin?

As promised, let’s look a little further into the definition of Old Tom Gin. From a high level, it is important to understand that one of the true defining characteristics of an Old Tom Gin is that the guidelines are not strict or set in stone.

This differs from a London Dry Gin, which has very specific requirements for its production. Old Tom Gin is a bit of a more free spirit, in that it can vary in ways from production to taste.

However, it is pretty much universally agreed upon that an Old Tom Gin is made with sugar, as opposed to a London Dry Gin that is crafted with only the smallest amount of sugar added. This makes for a spirit that has almost a liqueur-like taste and consistency.

An Old Tom Gin is perfect for reluctant gin drinkers who are perhaps giving the spirit the first try but are hesitant about the intensity of a London Dry. It is also a perfect spirit for many cocktails, which we will get into more a little later on in this article.

The other important distinction between an Old Tom Gin and a London Dry Gin is the amount of juniper flavor present. As mentioned, both types will have notes of the classic juniper taste, however, it is much more pronounced in a London Dry.

An Old Tom’s juniper flavors are much more subtle. They sometimes will also highlight other botanical flavors instead of focusing solely on the juniper notes, whereas a London Dry is typically focused only on the juniper.

Old Tom Gins can sometimes be aged in oak during production. This is one of the characteristics that tend to vary depending on the brand you’re consuming.

For example, Ransom’s Old Tom Gin is aged in oak. However, it is not a requirement for the spirit and is not considered a definitive trait of the Old Tom Gin.

The History Of Old Tom Gin

You may be wondering where this gin category began and why it veers so off from its relative London Dry. Well, Old Tom Gin’s history can be traced to the Dutch. In Holland, many were drinking a spirit called ‘genever’, which is often considered gin’s ancestor spirit.

Genever, much like today’s Old Tom Gins, is an incredibly malty spirit that has juniper notes but is not juniper heavy or overwhelming in any sense. It varies from traditional gin because it is made with grains like corn, rye, and malted barley.

Because of this, many describe it as a spirit that is somewhere between whiskey and gin.

Most historians agree that Genever found its way to England during the Thirty Years War in the 16th century. Slowly over time, the British population became enamored with Genever’s flavor and consistency, and it became a staple in the culture.

Old Tom Gin’s emergence can not be pointed to a distinct moment, but it is widely accepted that it was simply the natural combination of the London Dry Gins consumed in England and the genever that had found its way from The Netherlands.

This makes sense, as the Old Tom Gins of today have many characteristics of a classic London Dry gin, with the maltier and sweeter aspects of genever.

How Old Tom Gin Is Used

As previously mentioned, Old Tom Gin is a much better choice for those who are new to gin and are worried about the intensity of a London Dry. You will still get much of the classic gin flavor and feel, but it will be a sweeter and much less overwhelming experience for newcomers.

It is a hugely popular spirit to make with cocktails.

While you may think of a classic London Dry for a Gin and Tonic, an Old Tom Gin is perfect for more crafty cocktails and special occasion cocktails, rather than an everyday Gin and Tonic.

Let’s take a look at a couple of the most popular cocktails that an Old Tom Gin tends to shine in and if you should try drinking it straight or not:

Old Tom gin is one of several great gins to make a Tom Collins cocktail because it has a slightly sweeter taste than other gins.

A Tom Collins is a delicious and refreshing cocktail that’s perfect for a spring or summer afternoon. It’s light but strong, and definitely easy to sip slowly while reading in the sunlight or catching up with friends.

This cocktail is made with Old Tom Gin, club soda, lemon juice, and bitters. Many people also add a small amount of simple syrup to this drink and garnish it with a Maraschino cherry and a lemon slice.

In this cocktail, Old Tom Gin is perfect as it adds the sweetness needed to cut the tartness of the lemon juice. It is the perfect sweet treat to sip on to beat the heat.

The Martinez is a mysterious, yet delicious cocktail.

It is not as immediately recognizable as some of the more mainstream cocktails served in restaurants and bars, but for the fans out there, it is one of the most exciting and unique cocktails there is. It is also a perfect drink to use an Old Tom Gin with.

This cocktail is made with Old Tom Gin as the base. It is mixed with sweet vermouth and Maraschino liqueur. It is usually rounded out by a few dashes of orange and aromatic bitters.

It is then stirred and strained into an ice-cold glass and usually then garnished with a twist of a lemon peel.

It’s no surprise that this drink is often described as a mix between a Manhattan and a Martini.

It is sweet, with the Old Tom Gin flavors bringing the sugary aspect, and it is also fruity, warm, and spicy.

The Martinez is a perfect drink to surprise some friends by making, as many will love it and also be impressed by being served a somewhat unique and unexpected cocktail.

While many people do not initially think of drinking gin straight, it definitely is done (and respected) and can be a great choice for gin lovers who do not feel like mixing up a complex cocktail.

Further, if you know you are an Old Tom Gin fan, this is a great way to consume the spirit. It won’t feel too dry or intense like a London Dry, as the sweetness of Old Tom Gin makes it perfect to slow sip at your leisure.

As with most gins and gin cocktails, it is best to drink an Old Tom Gin straight in a chilled glass, or perhaps over ice. There is less of a need to cut the flavor because the sweetness already does this, but it still makes the drink taste even smoother and refreshing.

While you may have tried typical London Dry Gins and found that you were not a fan, an Old Tom Gin may be exactly the thing you need.

Old Tom Gins are unique in that they are sweet and malty, making them perfect to enjoy casually on their own, or as the base of your favorite cocktail.

There are tons of options for use, which explains why Old Tom Gin is so widely popular in the liquor world. It is versatile, delicious, and easy to work with. What more could you ask for in a spirit?

We can pretty much all agree that a gin and tonic is a great-tasting and very refreshing drink. When you think of a gin and tonic, you might not immediately say that it is a drink for men though. Therefore, when ordering a cocktail some men wonder ‘Is gin and tonic a manly drink?’ A… Gin is a trendy drink, and its smaller brother, pink gin, is becoming more and more popular as well! But what is pink gin? Pink gin gets its color from the fruits and berries that are used to give it flavor. Besides giving the gin a pink color, these fruits also make the gin sweeter… 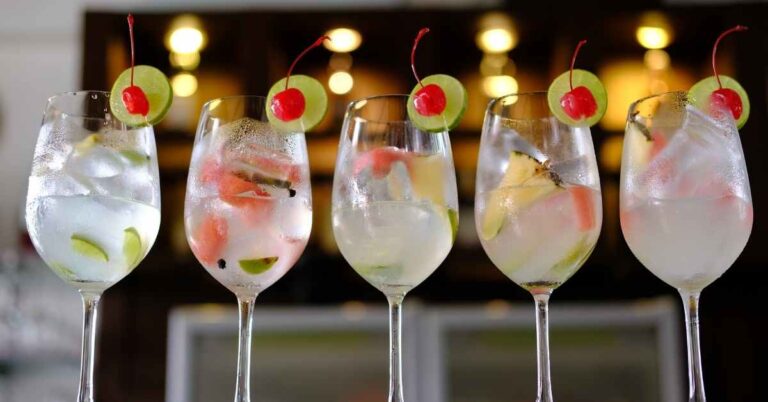 Gins come in many shapes and sizes – you can drink them in cocktails, shots, or as part of a delectable gin and tonic. It’s refreshing and perfect for any occasion. There are many brands and different types of gin, which begs the question: do all gins taste the same? Not all gins taste the… Grapefruit is a great addition to any cocktail, but gins also pair well with grapefruit. Not only do they pair well together in cocktails, but grapefruit and gin can help to improve the taste and texture of the drink too! Why Does Grapefruit Go so Well with Gin? Grapefruit is among the most popular citrus…

Whenever you ask an avid gin drinker whether you should stir or shake your gin, they’ll definitely tell you to stir it. Shaking is almost blasphemous in the gin world, but why so? The best way to serve gin is to stir it. Gin consists of many ingredients, of which the juniper and coriander are…

What Are The Main Differences Between Gin And Gin Liqueur?

At home or the bar, downing a drink is somehow much more enjoyable when you know all about it – or at least, what the... Is Gin Just Flavored Vodka? Difference Between Gin and Vodka

Both gin and vodka are among the most popular alcoholic drinks around today – they fly off the shelves in bars and supermarkets. Although they... If you’re looking to buy a gin for a special occasion or you just want a gin that you would probably really enjoy, it’s good...